The initial phase, a mobile app called MileUp that gamifies driving data for U.S. motorists, began its preview by Agero for iPhone® and Android™ devices during re:Invent.

“The U.S. is experiencing an alarming spike in traffic fatalities for the first time in decades,” commented Agero Chief Product & Marketing Officer, Christina DeRosa. “Shaving minutes off emergency response can save thousands of these lives. Our use of AWS has been critical in our ability to rapidly and effectively build, test and soon deliver a solution that hopes to do just that at scale.”

In 2015, the U.S. had the highest one-year percentage increase in traffic deaths in 50 years[1], and that trend is only getting worse in 2016[2]. Agero is striving to curtail this problem through real time accident detection and response, with the goal of reducing the average emergency medical services (EMS) notification time from 3-7 minutes to less than 30 seconds, saving up to 3,000 lives a year3.  Agero has helped pioneer roadside assistance, connected vehicle services, accident claims submission and more, for companies ranging from Ford, Volkswagen Group of America and Toyota, to Progressive and USAA.

MileUp, being previewed now and scheduled for release in January 2017, is a free app that rewards people for sharing driving data as part of an extensive real world beta test of Agero’s crash detection algorithms, Agero was able to rapidly build the gamification engine in MileUp from scratch using AWS. The company also uses the new Amazon Pinpoint capability for MileUp’s campaign management, user segmentation, lifecycle and points notifications, and more.

“Amazon Pinpoint helps customers understand their own customers’ behavior, define who to target, determine what messages to send, schedule the best time to deliver the message, and then track the results of their campaign,” said Simon Poile, General Manager, AWS Messaging and Targeting, Amazon Web Services. “As an early user, Agero has been able to use the technology in a highly complex use case such as the cloud-based mobile accident detection through MileUp and for a great cause.”

“The AWS solution architects and the Amazon Pinpoint team have helped in guiding and supporting our development effort,” said Raj Behara, Senior Director, Digital Products and Platforms at Agero. “When you’re dealing with a problem that’s as critical and universal as driver safety, it’s important to have a solution that can handle the scale of the issue and yet still allow us to move quickly.  That’s the type of capability AWS has given us.”

Agero’s crash detection algorithms are cloud-based and leverage several AWS services, including: Amazon Cognito for authorization, Amazon Aurora for persistence, AWS Lambda for compute, Amazon Pinpoint for campaign management and notifications, the API gateway for feature access, and a host of other AWS services to scale, manage and monitor the solution.

A preview of MileUp is now available in the App Store® and on Google Play™ in the U.S. only. Visit Mileup.ai for more details. The MileUp rewards program is scheduled to run for a limited time.

About Agero
With over 40 years of experience, Agero is a leading provider of software enabled vehicle and driver safety services, including roadside assistance, consumer affairs, and accident scene management services. The company protects over 80 million vehicle owners in partnership with leading automobile manufacturers, insurance carriers and other industry verticals. Partnered with one of the largest national networks of service providers, Agero responds to more than 9.5 million requests annually. Agero’s award-winning solutions leverage advances in technology and data services to accelerate and enhance response to drivers’ needs while strengthening customer loyalty. Agero, a member company of The Cross Country Group, is headquartered in Medford, Mass., with operations throughout North America. To learn more, visit www.agero.com and follow on Twitter @AgeroNews. 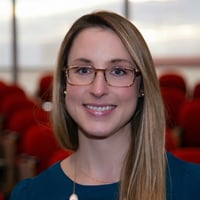 Kate leads public relations and social media for Agero, helping the company translate its vision and leadership into impactful and meaningful stories for the public at large. Responsible for helping Agero amplify its brand mission, support product awareness and increase understanding with clients, consumers, service providers, current associates and potential employees, Kate leverages her over 10 years of experience in this fast-paced role. When not at work, she enjoys spending time with her husband, young daughter and chocolate lab, Penny.